“On the Benefits of Point-to-Multipoint Coherent Optics for Multilayer Capacity Planning in Ring Networks with Varying Traffic Profiles” by P. Pavon-Marino, N. Skorin-kapov, M. V. Bueno-Delgado, J. Back, and A. Napoli 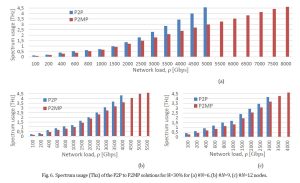 Abstract: Point-to-Multipoint (P2MP) coherent optics using Digital Subcarrier Multiplexing (DSCM) have recently been proposed as a promising new technology to reduce the cost and complexity of optical transport networks,particularly those in metro aggregation scenarios with Hub-and-Spoke (H&S) traffic patterns In this paper, we perform a case study on fault tolerant ring networks with more general traffic profiles, to assess the benefits of P2MP optics for alternative network scenarios, like those appearing in metro rings. We propose Mixed Integer Linear Programming formulations for multilayer capacity planning to minimize the total transceiver costs, considering both Point-to-Point (P2P) and P2MP transceivers, as well as a heuristic approach for the more complex P2MP case.
Results indicate that P2MP optics can bring several advantages for all tested traffic profiles, ranging from pure uniform flows to mostly H&S. Transceiver cost savings are achieved in various cases, greater at higher network loads and for traffic patterns that are mostly H&S. Results also show that P2MP optics prompt a multilayer redesign of the network with significantly reduced spectrum usage, nd a reduced number of IP hops, resulting in Lower Optical-Electronic-Optical and IP processing latency, and lower IP layer equipment costs, for all traffic profiles.

This project is supported by the European Union’s Horizon 2020 research and innovation programme under grant agreement No. 101016663 (B5G-OPEN)

We use cookies on our website to give you the most relevant experience by remembering your preferences and repeat visits. By clicking “Accept All”, you consent to the use of ALL the cookies. However, you may visit "Cookie Settings" to provide a controlled consent.
Cookie SettingsAccept All
Manage consent

This website uses cookies to improve your experience while you navigate through the website. Out of these, the cookies that are categorized as necessary are stored on your browser as they are essential for the working of basic functionalities of the website. We also use third-party cookies that help us analyze and understand how you use this website. These cookies will be stored in your browser only with your consent. You also have the option to opt-out of these cookies. But opting out of some of these cookies may affect your browsing experience.
Necessary Always Enabled
Necessary cookies are absolutely essential for the website to function properly. These cookies ensure basic functionalities and security features of the website, anonymously.
Functional
Functional cookies help to perform certain functionalities like sharing the content of the website on social media platforms, collect feedbacks, and other third-party features.
Performance
Performance cookies are used to understand and analyze the key performance indexes of the website which helps in delivering a better user experience for the visitors.
Analytics
Analytical cookies are used to understand how visitors interact with the website. These cookies help provide information on metrics the number of visitors, bounce rate, traffic source, etc.
Advertisement
Advertisement cookies are used to provide visitors with relevant ads and marketing campaigns. These cookies track visitors across websites and collect information to provide customized ads.
Others
Other uncategorized cookies are those that are being analyzed and have not been classified into a category as yet.
SAVE & ACCEPT